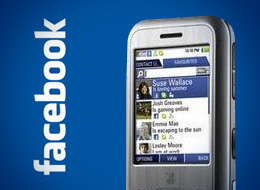 The rumors are abuzz in the market, about the existence of a new customized Facebook phone. The New Facebook Phone, tentatively named Buffy has caught the fancy of one and all and everyone wishes to know what the operating system of the new phone would look like. To rest all the curious glares, all you have to do is take a look again at your iPhone!

According to a very reliable source who worked closely with the people who actually worked on the Facebook’s phone project, informs us that when he saw the latest Facebook’s iPhone app, which was launched this fall, he was stunned by its strong resemblance to the operating system of the yet to be launched Facebook’s phone.

To cite an example, he informs that to reveal the menu, the news feeds slides to the right, which “was part of the initial design for Buffy.”

interestingly the much hyped Facebook phone is named Buffy after the famous vampire slayer series. It was previously named Slayer, a short for “social layer” but the executives at Facebook felt it was too rash for the fun, which is pretty much an amusing and frivolous concern given that its just a “secret” code name.

A source said that its beneficial for the Facebook that its iPhone and iPad apps will appear similar to the Buffy because it is Facebook’s goal to unify the design of all of its mobile software. However, diplomatic as eve, Facebook declined to comment on the story.

And now talking about the looks and the operating system appearance of “Buffy” you may wonder when exactly the phone will be out in the market. While covering all the little details about the new Facebook phone, All Things D reporter, Ina Fried and Liz Gannes told that it may take somewhere around 12 to 18 months for the first Facebook phone to see the light of the day. However going by what we have heard, users may not have to wait that long.

A dependable source who is very much aware about the Facebook’s plans for launching the phone reveals to us that if everything goes as planned, the Facebook will be launching the new phone, an HTC model, anytime in the second quarter of 2012.

Although the source also reveals that the 12 to 18 months time line holds truth for the introduction of the second phone from the Facebook. The second phone is likely to be a Samsung model and will come out in the fourth quarter of 2012 or perhaps the first quarter of 2013.

Other telecoms manufacturers who were once vying to build the new Facebook phone included the likes of LG and Motorola, but eventually it was acquired by Google.

Though it is still not confirmed if Facebook will launch the phone at all due to various reasons. It is a very uncertain and complex development and sources close to the project are not very optimistic about the it. A source extremely close to the project says he will be surprised to see the Facebook phone hitting the market.