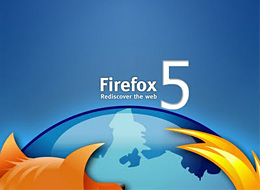 Just three months after the release of Firefox 4, Mozilla has pushed out Firefox 5 for the desktop and Android devices.

That’s a big change from the two years it took to move from Firefox 3.5 to Firefox 4. Firefox 5 is part of Mozilla’s new rapid release development cycle. This cycle, which is more akin to what Google does with its Chrome browser, promises faster, more iterative updates. With any luck, Mozilla expects Firefox to hit version 7 by the end of the year.

Sure enough, though, Firefox 5 was officially released on Tuesday complete with a raft of new features that promise to give the browser yet another boost. Here are five good reasons you should download Firefox 5 as soon as you can.

Mozilla’s Do Not Track feature gives users more control over the way their browsing behavior is tracked and used on the Web by allowing them to tell the websites they visit that they want to opt out of online behavioral tracking. Now, in Firefox 5, Do Not Track is even easier to find in the Firefox Preferences section.

Also of note is that Firefox 5 for Android includes the Do Not Track feature as well, making Firefox the first browser to support Do Not Track on multiple platforms, Mozilla says.

I’ve been feeling like Firefox 5 is faster, and that impression was recently confirmed over at Digitzor, which ran it through a bunch of benchmarks. Firefox actually blew away both Chrome and Opera on the SunSpider JavaScript test, in particular (no other browsers were included), and its cold start time compared very well with that of Google’s Chrome. Firefox 5 was also notable for taking up minimal RAM, even with 25 websites opened.

3. It Supports an Open Web

It’s actually more than 1000 improvements and performance enhancements that have been included in Firefox 5. They may not all be huge, noticeable user-interface changes, but they definitely make the software better.

Firefox is open source software, which means it’s not only developed with the help of users, but its security is continuously monitored and improved by a global community of users and developers. Mozilla, meanwhile, is an independent foundation. There’s no way a proprietary browser maker like Microsoft — or even a company like Google, which has its fingers everywhere — can compete with that independence and user focus.