Facebook, the favorite social networking site of common people, with 900 million active users, from which half of them using Facebook on mobile device will be disappointed to know that Facebook has been blocked from posting advertisements related to any Olympic games.

Facebook revealed that it would not carry any advertisement related to the Olympic games. It seems Olympics have become way too commercial, by this, we can say that Facebook will be a `Non-Commercial’ part of the Olympic games, but it has an official Olympic Facebook page, which includes the profiles of almost all the athletes. 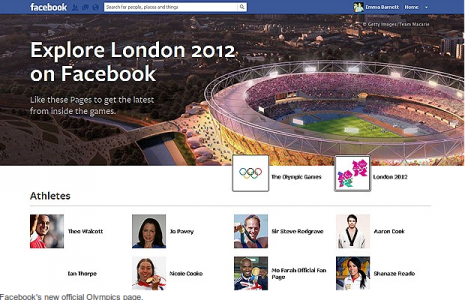 Apart from the athletes profiles, it has a complete timeline history of the competition since the 1800s. The athletes will not be able to post any video or picture from within the Olympic venue, as they are bound with the strict norms and guidelines of not posting any advertisement on social networking sites.

Through this page, fans can connect to their favorite athlete and teams. This page includes athletes like, British hopefuls Jessica Ennis and Tom Daley, Michael Phelps, basketball stars LeBron James and Kobe Bryant and David Beckham and dedicated pages for specific sports.

This page covers all the profile pages of hundreds of athletes, national teams and official organizational bodies to make them more accessible to its 900 million users. I’ts not just Facebook, Olympic Twitter and Google+ pages are expected to hit the online marketplace.