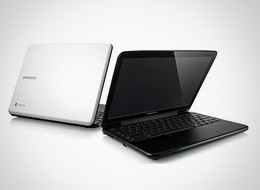 Google, a search engine giant has launched its first Laptop-Chromebook in the market on June 15 2011. With the laptop market conquered by the likes of Windows and Mac OS, Google has decided to build and optimize its Chromebook device for the Web so as to give users a quicker, simpler and more secure experience. At long last, the Google Chrome operating system is going prime time against MS Windows and Mac computers.

The first Chromebook models, from Acer and Samsung, went on sale on June 15 at Amazon.com and BestBuy.com. Acer’s Chromia-branded Chromebook models comprise of a Wi-Fi-only version for $349.99 and a Wi-Fi-plus-3G version for $429.99. Samsung’s versions are the Series 5 Wi-Fi model for $429.99 and the $499.99 Series 5 with. The Chromebook weighs about 3.4 pounds and sports an easy-to-type-on keyboard with refreshing modifications.

The new Chromebook is a breeze to set up. Enter your Google account username and password, and your Gmail, calendar appointments and settings will be synchronized. It wakes from sleep instantly and also has remarkable battery life. Google declares about 8½ hours of nonstop use. According to the company, Chromebook boot in 8 seconds and resume immediately with full support for the latest web standards and Adobe® Flash®. Apart from its comparative fast speed, there are other obvious benefits such as automatic update configuration and the lack of constraint of installation CDs.

You can get and effortlessly install free and fee-based apps in the Chrome Web Store — there are about 4,500 available. If you misplace the laptop, you can restore data from the cloud on another machine. Chrome software can be routinely updated with new features or security improvements, eradicating the need, Google says, for anti-virus software.

Models with 3G wireless to complement Wi-Fi include 100mb of free data from Verizon Wireless for two years. You will be required to provide your credit card details but will be charged only if you exceed your allocation. You can pay $9.99 for a 3G day pass or select a monthly plan that begins at $20.