Vincenzo Cosenza, an Italian-based social media strategist has looked at the most widely used social networking sites across the globe, according to traffic monitoring sites such as Google Trends and Alexa, and put together a map highlighting the leading platforms. He then posted his research work regarding the same on his blog, Vincos.it 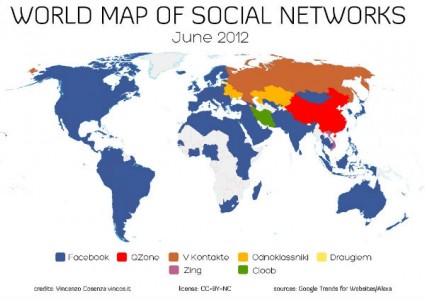 Facebook, the most widely used social networking site with over 845 million active users, is the top-used site in 126 out of 137 countries which were analyzed, including the Brazil, U.K. Australia, Japan, Canada, India and U.S.

However, Facebook has its roots in the United States having 222 million users, Europe is the continent having the most number of users on the website (232 million active users). 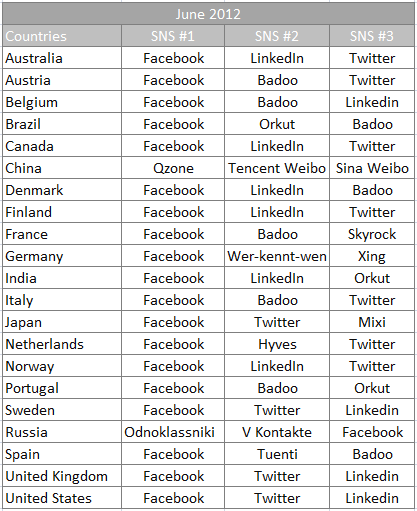 Meanwhile, from the data it is clear that Facebook is not the top social networking site in Russia (Odnoklassniki) along with China (QZone), Vietnam (Zing) and Latvia (Draugiem).

Cosenza noted on his blog “If we take a look over Facebook’s shoulders we can see the battle for the second position between Twitter and LinkedIn or, especially in Europe, between Badoo and Twitter,”

It is very interesting to observe that Google+ data has not been included by Google Trends for popular social networking sites.

Do you think other social networks have the potential to pass Facebook in certain regions in the future? If so, which ones and where? Let us know your opinion in the comments.