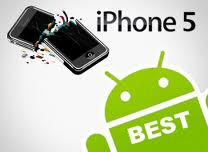 Google Android-powered smartphones have gained prominence in the last two years and grown rapidly to an extent where, as of May 2011 Google said, 400,000 new Android devices were being activated every day compared to 100,000 per day in May 2010. Also more than 100 million devices have been activated so far.

According to Gartner research, Google’s Android operating system accounted for 36.2 million smartphones sold worldwide in Q1 2011 giving Android a market share of 36 percent compared to with 27.4 percent from Nokia Symbian. And Symbian was replaced by Android as the world’s leading smartphone platform during the last quarter of 2010.

Meanwhile, Apple’s iOS came in third with 16.8 percent of the market share and iOS sold 16.8 million iPhones, according to Q1 2011 report from Gartner.

So here is a look at 10 reasons why Android-powered smartphones may displace iPhone 5 in days to come.

Innovation:
Even before Google Android platform came into existence, Apple with its brand name was considered to be the most innovative company in the industry. But after the release of Android-powered smartphones, Google has been following the path which Apple has set like coming up with something new and fresh that appealed to consumers in the form of iPhone. The Android-based smartphones’ innovative approach has attracted more consumers to their shores helping them match Apple’s iPhone.

Increased Fan Base:
The recent sales figures show how people weigh the Android-powered smartphones. In fact, iPhone is still an iPhone as it only gets upgraded and added with new features. Although, iPhone continues to sell well, the “wow factor” that once pulled consumers is giving way. The excitement from the original iPhone is slowly fading away. Recent rumors suggest that iPhone 5 will be another revolutionary upgrade. And as the iPhone 4 proved, delivering major upgrades takes time. With no alternatives in the block, more and more people are shifting to Android-based smartphones as it blends in with many different varied smartphone makers helping consumers to choose from lot of available options. The Android developers understand the need of the customers and provide the compatibility that OS needs with different devices. Also most consumers are happy to see the increased availability of different apps and modifications that can be done in Android smartphones compared to iPhone.

Speed:
There is no word on whether Apple is planning to integrate the 4G technology in the upcoming iPhone 5. Even if Apple brings out the 4G technology, it is still new in the block compared to Android-powered smartphones (like HTC Thunderbolt) which are receiving rave reviews for the technology. Moreover, Android powered smartphones come with increased RAM memory compared to the latest version of iPhone to give that added advantage in terms of speed.

Pricing:
The price factor is very important as most users tend to change their smartphone as it ages and the availability of cheaper and more sophisticated Android phones (Motorola Atrix is now priced at $99) at a cheaper price making it more viable than others. Moreover, Apple maintains high prices for the iPhone. And surely Apple will plan to keep that momentum with iPhone 5.

Brands Involved:
Apple is well-respected brand, hence, iPhone 5 will get all the adoration. But one cannot forget the brains behind the entire Android operation, the Google. And Google teaming up with different carriers along with different manufactures has increased the credibility of Android devices. Google along with HTC, Motorola and Samsung has same track record as Apple, enjoys a similar standing in the market and is generally liked by the mainstream.

Open Source:
Anyone can get access to the source of Android to better the system. This is also a double-edged sword, in the sense, it allows those will less-than-ideal intentions to discover any weakness of the phone. But that can be seen as an indirect plus because when weaknesses are found in the open source community, they are quickly fixed. The same thing cannot be expected in iPhone 5.

Flash:
Flash has become a major setback in iPhone. Android phone supports flash that even Apple iPhone 5 will not support.

Handsets:
There are more than 100 Android varieties and still counting but iPhone 5 will just be an upgrade. Android has choice of feature, features you want, features you don’t, choice of removable battery and memory expansion slot.

Carriers:
Apple iPhone is generally available with limited number of carriers, hence, iPhone 5’s appeal, but Android is available with almost all the carriers and offers plans suiting to each and everyone’s individual needs.