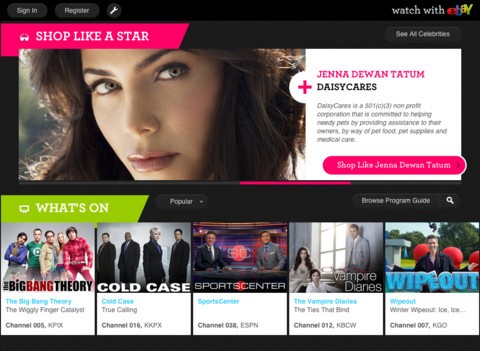 The latest app being released by the giant ecommerce shopping portal – eBay aims to combines two of the favorite sources of passing time by the Americans – To shop and watch TV.

Though the market has been abuzz with the ripples created by location based apps like Glancee, Ban.jo, and Sonar in this year’s Southwest Interactive Conference (SXSW) which is being held in Austin, Texas, the new Watch With eBay iPad app was not left behind in stealing the lime light. 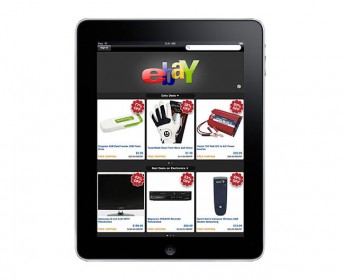 The one of its kind iPad app, Watch With ebay will allow the users to browse through the products related to their favorite TV programs, all in real time. For instance, if you are a shopaholic and simply loves fashion, you can watch a gala red carpet event and find and shop for the designs that you are seeing live on TV. All this can be done with the help of Watch with eBay iPad app.

If you are curious behind the functioning of this iPad app, you should know that the same has been made possible with the help of zip code based guide which is embedded in the app, as told to Engadget. Further, PC World explains that Watch With eBay app sync up with the schedules of local programs which allows the TV viewers to become the buyers, all with just a touch of the finger. All that the users has to do is choose the show that they are watching, from the given list provided on the app and see the products which are available for the same. 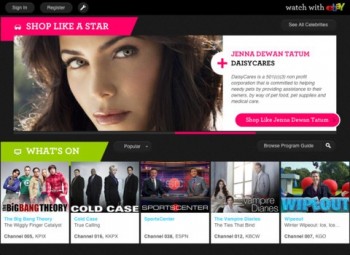 And that’s not all. The new app also provides you with a feature called “Shop Like a Star.” This feature allows the users to buy the products which are recommended by their own favorite star. Richard Brewer Hay, the senior manager of corporate communications described the feature on the blog of eBay. He wrote:

Through eBay Celebrity — a unique shopping destination that combines celebrity experiences, memorabilia and merchandise with philanthropic causes — Shop Like a Star provides an inside look at featured celebrities’ favorite items, while eBay curates shopping results related to the celebrity picks and provides the option to donate to a benefiting charity at check out.

As per the PC World, eBay may be expected to take the app a step further by selling users the products which has been actually used in the TV shows. This will be a music to the ears to those users who have always wondered from where did their favorite stars shopped.

Check out the new Watch With eBay iPad app released by eBay, and let us know what you feel about the same.