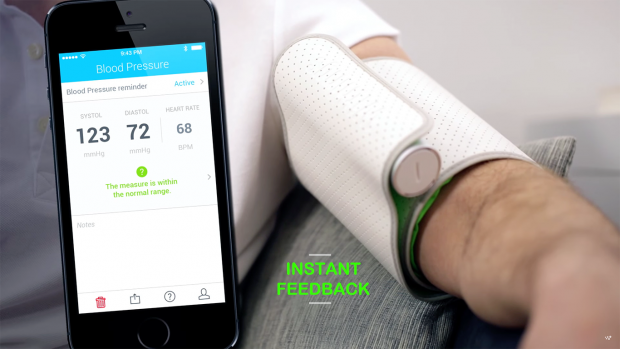 Nokia has already made a comeback to the smartphone industry with the launch of Nokia 6 and the re-launch of the Nokia 3310 and now, it seems to be making headway into some other categories too.

HMD Global, which overtook the Nokia brand, once the company’s deal with Microsoft ended, merged its Withings consumer electronic company with Nokia. Nokia will now adorn not just smartphones, but will also be present on health devices — the company launched two new products, the Nokia Body and the Nokia BPM+.

The Nokia Body is a smart weighing scale, which will provide feedback to your phone. It will prepare a weight trend and provide feedback on body mass index. The device will automatically synchronize with Nokia smartphones, cost $59.95 and come in black and white colors.

The company also has advanced versions of the weighing scale — the Body Cardio and Body+. The Body Cardio delivers metrics such as full body composition, heart health metrics such as pulse wave velocity, water percentage in body and muscle and bone mass and costs $179.95, while the Body+ acts like a virtual health coach, which records and rewards the user based on health-related data. It also lets users set goals and monitor their progress.

The Nokia BPM+ is a slip on cuff that measures your blood pressure and wirelessly transfers the data to your smartphone. It also provides users with feedback related to Hypertension, so they can take preventive measures for avoiding the ailment.

According to the Verge, other Withings products such as the activity and sleep tracker, Go and Home which is a video and air quality monitor could also make the mark.

The launch of the health-related devices entails the Nokia brand will now not just be used for smartphones, but even Internet-of-things style smart devices. All these products supply the stats to the Healthmate app on Nokia smartphone.

While Nokia’s current endeavors, such as the Nokia 6 smartphone or even its health offerings might not be as big a draw as Samsung and Apple devices, it seems the company is trying to claw its way back into the market. It might be late to the party since Samsung and Apple have moved eons ahead of where they were at the time it left, the health products and the Healthmate app represent a wholesome approach from the brand, which consists of a not just offering budget smartphones.

Of All of Nokia’s offerings, the Healthmate app might be the most appealing to smartphone customers as it goes head to head with similar offerings from Samsung and Apple — S Health and Apple Health. The app doesn’t only show collated health data also shows wellness programs tailored to users’ personal health goal.